The answer to speed as we approach these limitations in physics and physiology is improving the shape of the hull and the prop-  what in physics (and boat-building) is called hydrodynamics. The longer, and narrower the shape of the hull, the faster the boat will slide through the water with far less power pushing it along. But when a swimmer tries to simply swim harder to go faster, the increased turbulence (waves, splash, bubbles, and noise) also increases resistance in the water. That thrashing comes at a high price in energy and injury- so it is imperative that a swimmer develop a form that requires less power and much more precision of position and movement. We call this swimming hydrodynamics “active streamlining’. 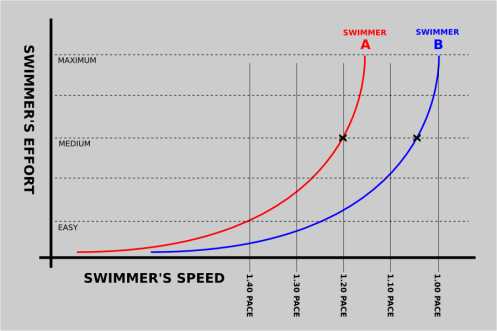 This diagram displays the basic hydrodynamic and physiological reality in swimming. The faster Swimmer A tries to go in the water, the more effort he has to put out. And because water increases resistance against him exponentially as velocity increases, smaller and smaller slivers of speed are gained only by enormous amounts of additional effort. As his curve goes vertical he reaches his  muscular limits as a human swimmer- but he has not reached his neuro-muscular limits. Swimmer B, in contrast able to swim at the same speed with far less effort, or at the same effort as Swimmer A with far more speed. Assuming all other factors equal, the simple difference is form. Swimmer B has far superior form, and requires less muscular strength to swim faster than Swimmer A.

The basic lesson of this diagram is that in order to go faster with the amount of power the swimmer already has on hand, he must improve his form. By improving form, the swimmer ‘slides’ his curve to the right, to swim like Swimmer B, thus achieving the same speed with less effort, and faster speed with the same effort.

The best swim programs aim to achieve the same thing- a sleek, slippery, efficient swimmer. But what we rarely see is a program that can consistently produce efficient swimmers, of all ages, types, and levels, in as short period of time as TI does with such long lasting results. And more than this, Total Immersion has proven this approach time and time again by helping swimmers who’ve otherwise written off their ability to swim well (or been written off by coaches), and turned them into amazing swimmers with renewed hope for their swimming potential. The secret is in how we go about training the neuro-muscular system to prefer and maintain superior form along the entire swim- especially when under the stress of longer distance and higher intensity swimming.

To help swimmers ‘slide’ their curve to the right without requiring more power Total Immersion has tapped into the latest insights of neuro-biology and it’s application in sports, particularly for swimming in the very dense, unnatural-to-mammals medium of water. Helping you move up your performance curve is what common swim training programs do best. Helping you slide your curve to the right is what TI does best.

This site uses Akismet to reduce spam. Learn how your comment data is processed.

To receive the latest news and updates from Mediterra.

You have Successfully Subscribed!